~ Warning: Toxic – this profile is for botanical interest only, and I do not recommend internal or external use of this herb, nor will I be held responsible for any incidents that result from those who ignore the warning. In Canada, foxglove can only be legally processed for medical use by licensed pharmaceutical labs and must be prescribed by physicians. ~

The following information may not be re-posted, copied or published without my permission and appropriate credit given. Please contact me via email (listed on the About page) if you wish to re-publish any of the information on my blog.

Foxglove flowers in the early summer of its second year, and can continue blooming until fall in some climates. The leaves can be harvested in any dry season, however those harvested in February and March contain almost double the glycoside content of those harvested later in the summer.

Digoxigenin (a steroid only found in this plant and other subspecies under the digitalis umbrella), digitoxin, digitalein, digitalin and digitonin (all cardiac glycosides), starches, gums, sugars and volatile oils, and others that have not yet been discovered in labs. 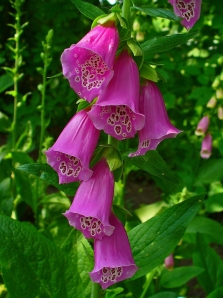 Foxglove has historically been used as a salve or poultice for old wounds and ulcers, or internally for dropsy, as an expectorant or to suppress appetite and encourage weight loss (not recommended by modern doctors, as even in a low dose it can cause anorexia). It is currently used in the standardized form to treat heart arrhythmia and other cardiac issues, and heart failure that can not be controlled by other medications. Interestingly enough, digitalis has not been attributed with reducing the mortality rate of most heart attack sufferers, but it seems to reduce hospitalizations in the ones it treats successfully. This means that it either works great and eliminates the problem, or it completely refuses to save the patient. The steroid digoxigenin is used in molecular biology to detect DNA or RNA.

The homeopathic form of digitalis is also used for heart complaints – both physical heart failures and palpitations, and also emotional heartbreak, grief and loss. It is also used for cardiac complications caused by smoking. Other symptoms that call for homeopathic digitalis: faintness, feeling like one is going to die, cold and bluish toned skin, liver problems/jaundice, exhaustion, giving up, slow pulse, suicidal thoughts, exhaustion from even slight physical activity, adrenal fatigue, loss of appetite, feeling better when stomach is empty and the patient is in fresh air, anxiety about the future, uncertainty, fear, insecurity and inability to handle shock or change, sudden hot flushes followed by nervous weakness, seeing visual distortions and auras/halos, confusion, mental “noise” that makes it hard to concentrate, vertigo/dizziness, constant need to urinate, soreness especially behind the lower ribs, tightness in throat that may make the patient unwilling to talk, limbs “fall asleep” easily, measle-like marks and skin irritation on the back especially, sunken facial features.

Digitalis is an antidote to aconite poisoning when given as a subQ injection.

Due to its narrow therapeutic index and precariously unpredictable dosage window, herbalists in most countries are restricted from using this herb in its botanical form (that includes preparations such as tinctures, salves, tea, etc.) A physician may prescribe a standardized pharmaceutical where the digoxin is extracted into a set dose in a pill form, which is safer since you know exactly how much of the active compounds are in each pill (something you never can guarantee from one plant to the next).

Digoxin preparations can be found under the names Lanoxin, Digitek, and Lanoxicaps. It is also available as a 0.05 mg/ml oral solution and 0.25 mg/ml or 0.5 mg/ml injectable solution.

Do not use except under the advice and supervision of a physician, unless you are choosing the homeopathic preparation. Foxglove interacts with anti-malaria meds, verapamil, amiodarone, erythromycin, and epinephrine (as would be injected with a local anesthetic). Never to be administered to pregnant or nursing women, children under 18, or anyone with low potassium or prior organ failure. In North America you can face criminal charges if you administer this plant in its non-homeopathic form (unless you are a physician). Even if the patient survives and you saved their life, you can still go to jail for giving a known toxic compound, so I could never recommend that any non-doctorate practitioner risk giving this plant to anyone. Even doctors use it as a last resort for heart patients, due to the plant’s tendency to decide for itself if that person was meant to live or not.

I suggest consulting a pharmacist or physician before starting any herbal supplement if you are taking a prescription medication or have serious underlying health concerns.

Those suffering from digitalis poisoning may experience liver failure, jaundice, nausea, tremors, diarrhea, convulsions, visual disturbance/seeing yellow-green or blue halos, difference in colour perception, blurry vision, vomiting, loss of appetite, anorexia and (more commonly) palpitations, heart attack or failure due to unpredictable fluxes in heart rhythm. All of the above symptoms can also occur from accidental ingestion – even drinking the water from a vase full of foxglove has proven fatal to some, especially children and animals. Drying does not reduce its toxicity at all. It is poisonous to all animals it has been tested on.

Some cases have been known to recover from accidental poisonings or overdoses by going on an IV with high doses of potassium, or administering atropine, although not everyone will be saved by this. The cardiac glycosides can not be removed from the body by binding chelation or other detoxification means. They will run their course.

This plant has an attitude. She considers herself to be a qualified healer as well as a poisoner, and she doesn’t give a damn what you wanted from her, or what you were using her for – she is not to be misused, or taken for granted, and she can assess and treat (or dispose of) your patient for herself, thank you! You will see what she wants to show you, and you will either die at her feet or you will continue with a different set of perceptions than you had before you met her. It really isn’t up to you, once you put your life in her hands, it’s her call.

She is feminine, ruled by Venus and affiliated with the element of water. She is associated with all things fae, but also has ties to the underworld and some daemonic involvement. She has no problem crossing realms and befriending creatures of all different aspects and orientations. She is fiercely protective and guards her heart. She is at once judgmental and non-judgmental.

This is a faerie loving plant, it attracts them by the drove and they do not suffer from drinking water out of its tube-shaped flowers. They enjoy the visual disturbances – in fact they don’t think it’s disturbed at all, but rather, seeing something that you were not able to see without the plant’s help. Because people poisoned by foxglove tend to see halos and other visual “tricks of the light” these flowers are attributed with helping folks see fae. The flowers were planted around a home to protect the family, but it will only protect those homes with hearts filled with love.

Disclaimer: The information on this website is intended as general education on herbs only.